Available Now! Book I of the Outlaw Girls series 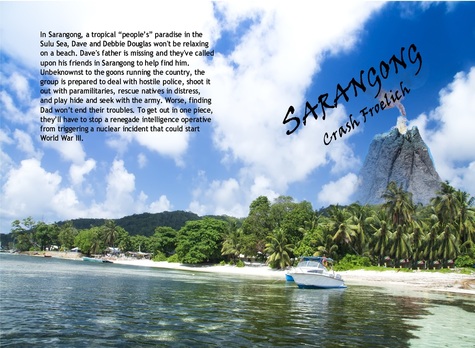 This newest novel from author Crash Froelich demonstrates a deep understanding of the conflicts involved in establishing and maintaining a so-called “people’s state.” On the one hand, every aspect of the environment is regulated by the military and police. On the other, the two women who assist Dave and Debbie Douglas are tough and resourceful entrepreneurs involved in the black market. For that matter so is Ying Ying, who’s being held prisoner on an island with Dave’s dad for shipping contraband items to a military restricted zone. Why this zone is restricted as the center of a plan for one woman’s vengeance is the driving force of the plot and the inconceivable crisis in waiting that the Douglases and their allies must unravel and prevent before it kicks off WWIII.

As a book you’ll find hard to put down, Sarangong is a fast-paced journey through military intrigue in a world of spies, lies, and survival against all odds.

This science fiction espionage adventure is set in the country of Sarangong, an island nation in the Sulu Sea, in the middle of this century.  Since the most powerful contrarian nation on earth is China, Sarangong fell into the PRC’s sphere of influence.  The US has formed a defense alliance with Russia, Japan, Korea, Taiwan, and India.  This Asian Commercial Defense Consortium keeps the PRC in line by employing space‑based terawatt lasers and utterly intrusive surveillance technology that is undetectable and capable of targeting with pinpoint accuracy.  If the last Communist hold‑outs won’t play nice, they won’t be allowed to play at all.

Dave and Debbie Douglas seem to be on vacation, but after spending thirty-seven hours in airplanes to get to Sarangong, they won't be relaxing on a beach.  Unknown to the goons running the country, the Douglases have come to rescue Dave's father.  Charles Douglas went incommunicado under mysterious circumstances and they've called upon his friends to help them in their search. Before they find Charlie they'll have to deal with hostile police, rely on wanted criminals, rescue persecuted natives, shoot it out with paramilitaries, play hide-and-seek with the army, and prevent a nuclear incident.