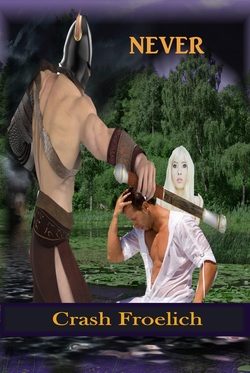 After a fairy drank the poison left for her human boy, he pleaded for the children of the world to save her.  Most kids ignored him.  Some sneered.  None wished her well.  Those spiteful acts forever changed them.

The boy used the power of his eternal childhood to save the fairy who loved him.  As a result, she ceased to be a fairy and he became that creature he most despised--an adult.   For years afterward they roamed the planet as father and daughter.  The former fairy's acts of vengeance, for the “bad thing” done to her, forced them to move from place to place to avoid the consequences.  In 1963, they wandered into Saint Joseph, Missouri to find friends and hope for ordinary lives. It isn't easy, however, to stay out of trouble.

The former fairy doesn't sling pixie dust or sing duets with bluebirds. She's more likely to cause acts of mayhem or slip you fudge made with EX-LAX.
Purchase Hardcover
Purchase Softcover
Purchase in eFormat