Welcome to my web site 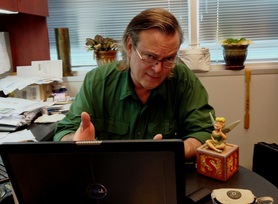 I'm from Kansas City, both of them. My folks lived in Gladstone but the nearest Hospital was Providence, in Kansas.

When I was two, we moved to Saint Joseph, Missouri and an apartment across the street from the Krug Park Lily Pond. I'll be forever grateful to my parents because growing up in that place was magic. The magic lasted until I was in fourth grade, when the family, now including two younger siblings, moved into a split level ranch on the east side of town and the wilds of a partially developed area with woods, creeks, and construction all around. Exploring and baseball took the place of magic. Soon the wildness of the place became tame and well-ordered. So did I.

High school was followed by a few frustrating years in college. Restlessness prompted me to join the Army. I traveled the world, drank deeply from the cultures of Germany and Korea, but the magic called to me in a weak voice and stirred me. I graduated with a Master of Science in Applied Mathematics from Missouri University of Science and Technology. Years in aerospace and defense contracting were fulfilling and rewarding, but the magic still whispered its siren song.

Finally, after years of struggling, I set the magic free. Stories took shape, guided by characters crafted with care. Characters that live with me always, because they are my children.

Children burst from my brain as Zeus gave birth to Athena. Now they live for you, dear reader. Enjoy with my compliments.