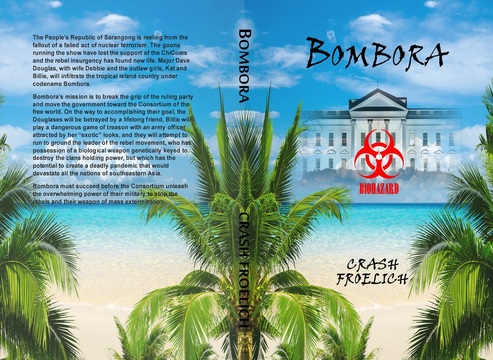 The People’s Republic of Sarangong is reeling from the fallout of a failed act of nuclear terrorism. The goons running the show have lost the support of the ChiComs and the rebel insurgency has found new life. Major Dave Douglas, with wife Debbie and the outlaw girls, Kat and Billie, will infiltrate the tropical island country under codename Bombora.

Bombora’s mission is to break the grip of the ruling party and move the government toward the Consortium of the free world. On the way to accomplishing their goal, the Douglases will be betrayed by a lifelong friend, Billie will play a dangerous game of treason with an army officer attracted by her “exotic” looks, and they will attempt to run to ground the leader of the rebel movement, who has possession of a biological weapon genetically keyed to destroy the clans holding power, but which has the potential to create a deadly pandemic that would devastate all the nations of southeastern Asia.

Bombora must succeed before the Consortium unleash the overwhelming power of their military to stop the rebels and their weapon of mass extermination.
Purchase Hardcover
Purchase Softcover
Purchase eBook

See the giveaway details at Goodreads.

Returning to the “people’s” state of Sarangong as part of Operation Bombora, Dave and Debbie Douglas, together with Dave’s dad, his new wife, and their friends Kat and Billie are putting their lives on the line so the people of Sarangong will know freedom for the first time ever since meeting modern civilization.

Inducted into the U.S. military as important native assets, Kat and Billie belong heart and soul to the liberation effort. In Billie’s case, it means being a “real” girl for a member of the Sarangong military, whose attraction is the lynchpin that could result in defection to their cause. For Kat, it means convincing a pastor aligned with the native rebels that his ignorance and naiveté have led to misplaced allegiance.

To make matters worse, their objective of government overthrow is not the only risk. Above and beyond all else, they must track down the insidious, invisible threat gestating in a young man’s body: the biohazard of prion bombs meant to be loosed on Sarangong’s ruling military and political party, as well as important tribal families. If they don’t, there will be an uncontainable pandemic, resulting in mass murder that could spread throughout the world.